*View the list of countries visited by the W Master of The Methven Lodge #51 by hovering the curser over “METHVEN” Tab & then “INTERNATIONAL VISITING” in the Menu above, a sub-menu of countries will appear, the writer went to each of these countries and investigated opportunities of visiting a Masonic Lodge.  Due to time restraints some were unable to work, but learn of his experiences.

TO VIEW A SPECIAL NZ GRAND LODGE PAGE  FOR MEMBERS WISHING TO VISIT INTERNATIONAL LODGES CLICK ON THIS WEB ADDRESS: 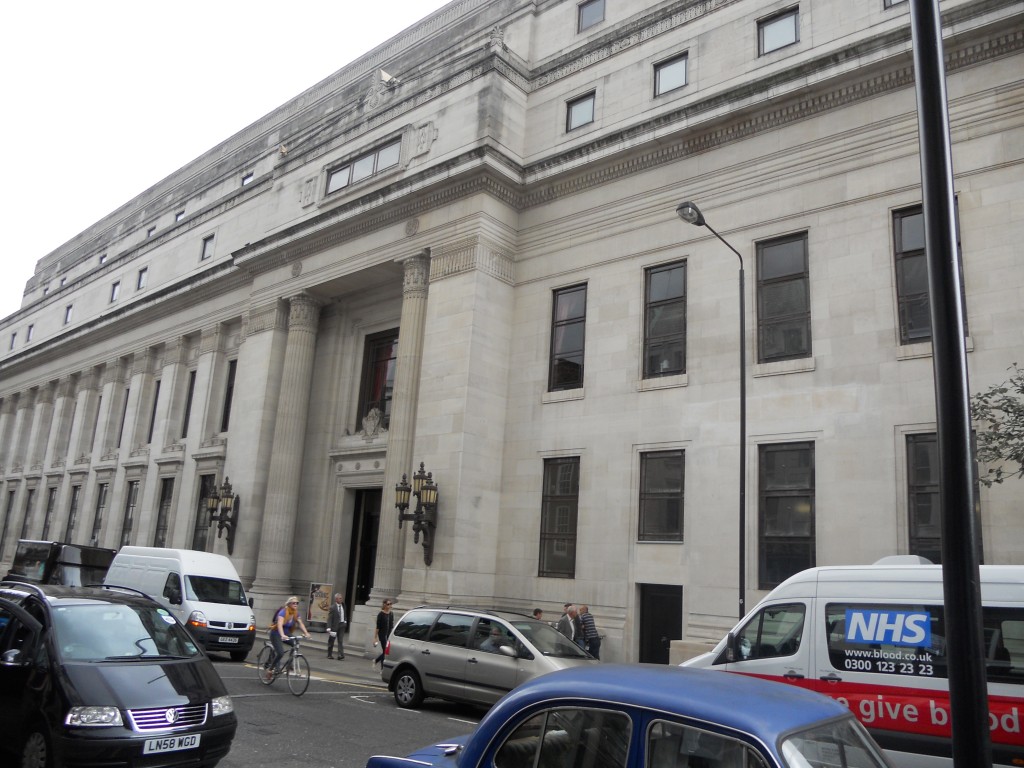 It strongly indicates Freemasonry’s Global presence with some 9 million members world wide.  It has Lodges operating under their countries jurisdiction or directly under one of the three main constitutions in Britain – England, Scotland or Ireland.  Lodges meet in the most unlikely of countries – Russia, China, Korea, all South East Asian countries, Arab countries of the Middle East and most African countries.  Very numerically large in North, Central and South American countries too.  All European and Scandinavian countries (The latter under the Swedish rite).  In fact it is difficult to name a country that does not have active Freemasonry in it. 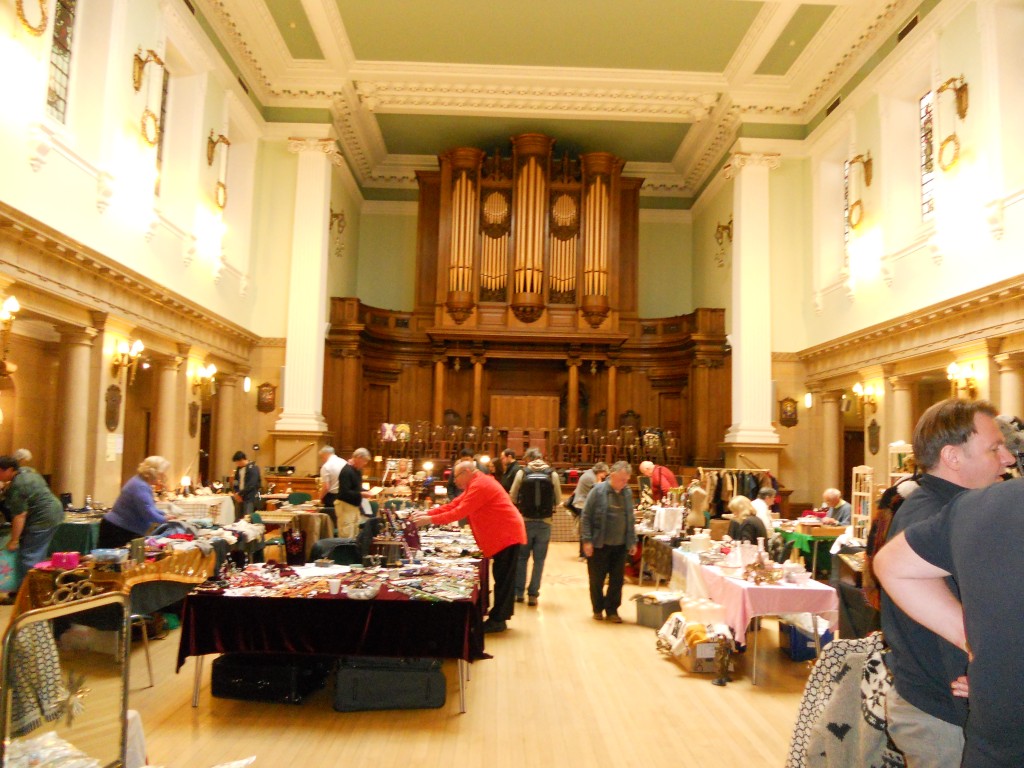 The Main Meeting Room of the Grand Lodge of Scotland, George St, Edinburgh. Used for Charity sales Stalls the day the photo was taken.

It is truly International in all respects.  It embraces all religions and political proponents, and as is in New Zealand, religion and political discussions are banned within the Lodge structure.  Peace, Love and Harmony are 3 precepts which direct members.  Brotherly Love, Relief and Truth are 3 tenets of Freemasonry.  Temperance, Fortitude, Prudence and Justice are its 4 cardinal virtues.  To have these features amongst men all around the world goes a long way to cultivate Peace and Harmony among the world’s people.

W Bro George Currie (Methven) has visited Lodges in Australia, Canada, Scotland, Israel, Iceland, and Japan, armed with NZ Grand Lodge accreditation, once accepted is a remarkable feeling of being among brethren of like minds.  The warmth and reception remains a life long memory. 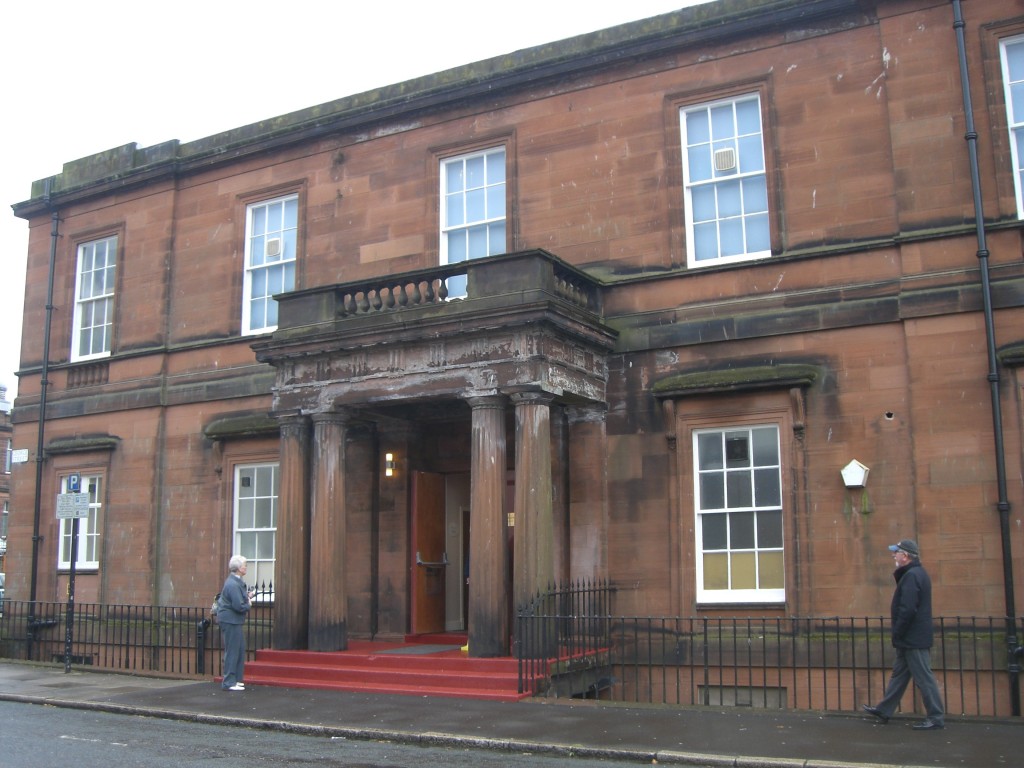 A few years back a very noted Freemason in Christchurch City, the late VW Bro Ray Pugh-Williams PG Lec who spent all his life riding the ocean waves as a member of the Merchant Navy.  His last posting was as Master of the “Rangitira” inter-island ferry, the last Lyttelton to Wellington overnight ferry on that route.  He was a very dedicated Freemason and there were very few World Ports that he had not attended a Masonic Lodge in.  He gave many vibrant and expressive lectures to Canterbury Lodges.  His Masonic experiences were great in length and he told of the visits to Lodges in “other” country religious persuasions than western Christian ones for which we are familiar with. 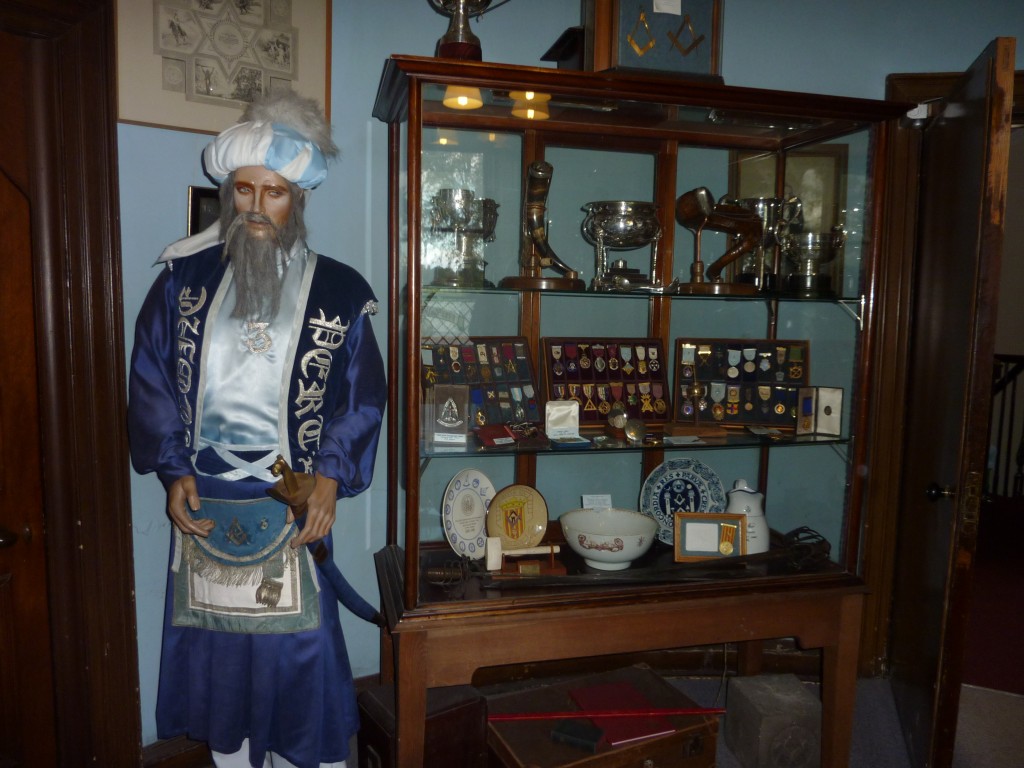 Lodge of Scone (pron, Scoon) Museum in Perth, Perthshire, Scotland. An Ancient Manikin dressed as one of their earlier Tylers.

Like Law Courts, Parliament, and places where justice is called upon, Freemasons give an oath in New Zealand as do other western countries, on the Bible.  Freemasons call the Bible “The Volume of Sacred Law”, for if one travels to other than Christian countries, they have a “Volume of Sacred Law” too, but it is called whatever their national religion is.  It would be the “Koran” if it is an Islamic country, the “Tipitaka” if in a Buddhist country, or one of the “Vedas” in Hindu.  The “Torah” in Hebew for the Jews.  In NZ new candidates of “other” religious persuasions can nominate their own VSL if they wish.  The late VW Bro Pugh-Williams visited one Lodge which had 8 different VSLs opened during their meeting, my recollection was that it was in Singapore.  This shows its wide universal acceptance in most countries around the world.

Big City Lodge buildings have several Lodge meeting rooms, with London having 11 rooms in their very large building, many being used for meetings all day long.  London has a very large Masonic Museum and a big Bookshop for all items of Masonic interest.  All the City Freemason’s buildings are open to the public, including the London Museum and Bookshop, where the many Masonic jewels, regalia and souvenirs can be seen and purchased. 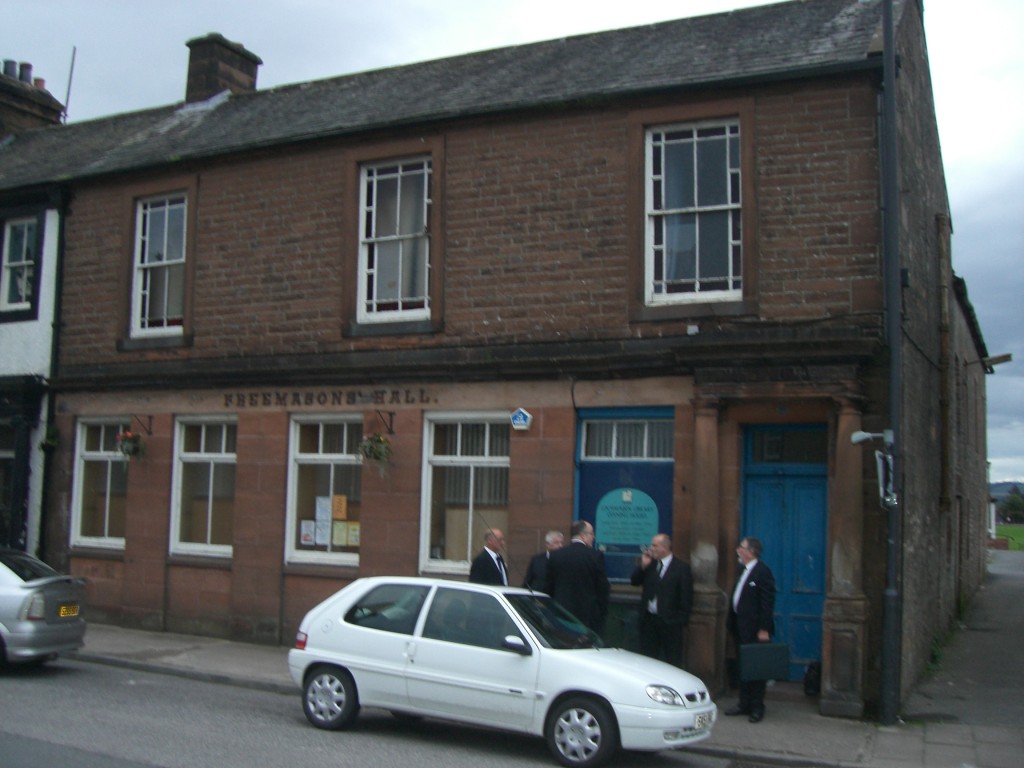 W Bro George Currie’s experiences are seen here in these photos of visiting in Scotland. 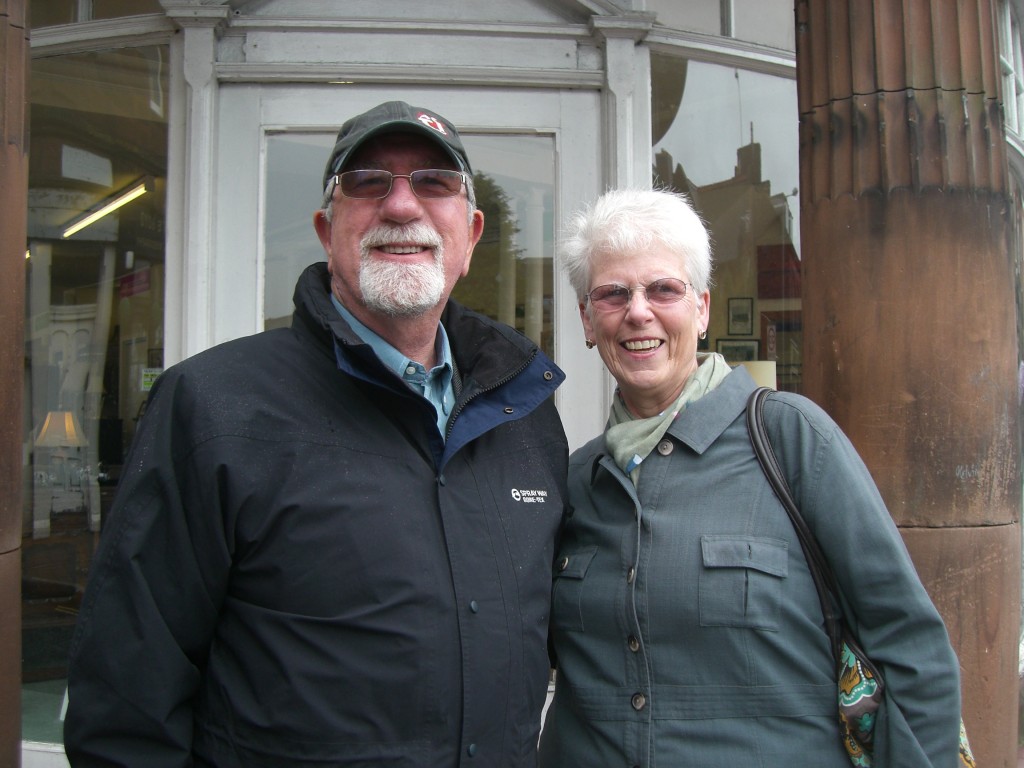 International visiting is challenging, exciting and fun.  The reception a visitor receives is one of my most pleasant experiences in my 50+ years of being a Freemason.  Preparing well before starting one’s travel is the secret to a successful time with our international Brethren.  Directly above here is my first host, RW Bro Bill McLeod and his good wife Ann, living in Georgetown, Dumfries, Dumfriesshire in the SW of Scotland, taken at the front of the Dumfries Lodge rooms.  Bill and Ann were absolutely marvellous as Masonic hosts, and for several days went out of their way to make my stay with them a very memorable one.  My choice of Dumfries was based around family heritage on my paternal side and Bill and Ann devoted a week to make my stay better than one would have expected.  On being received at 3 meetings while there was something to be experienced and proved the world fraternity all that it is. 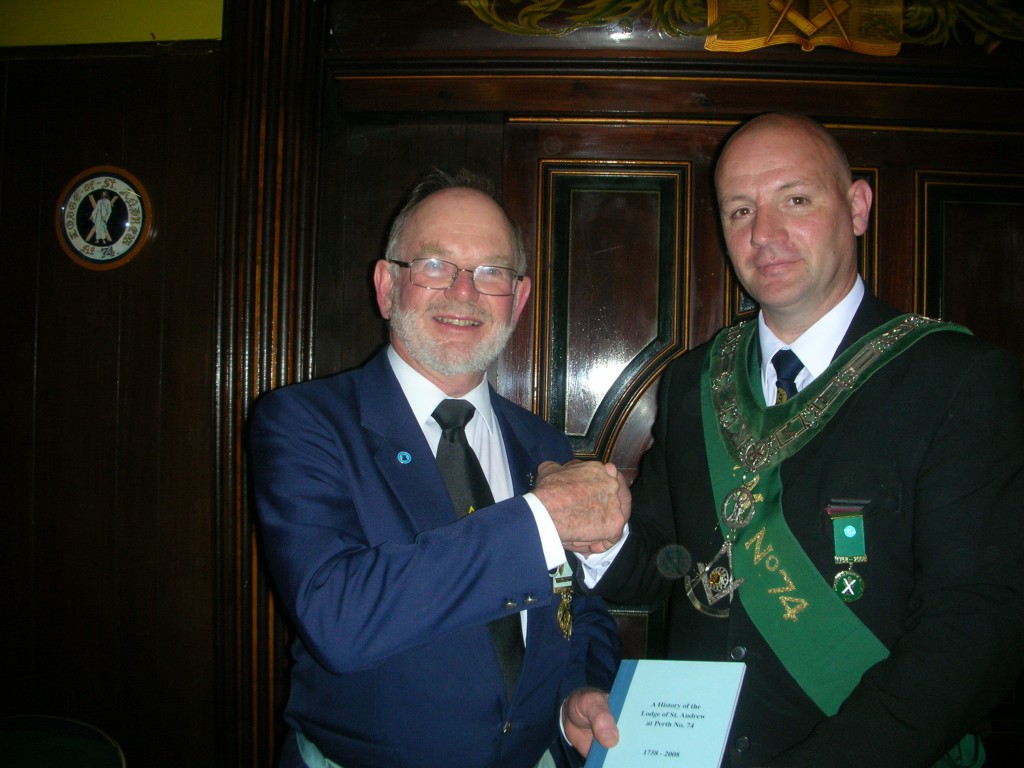 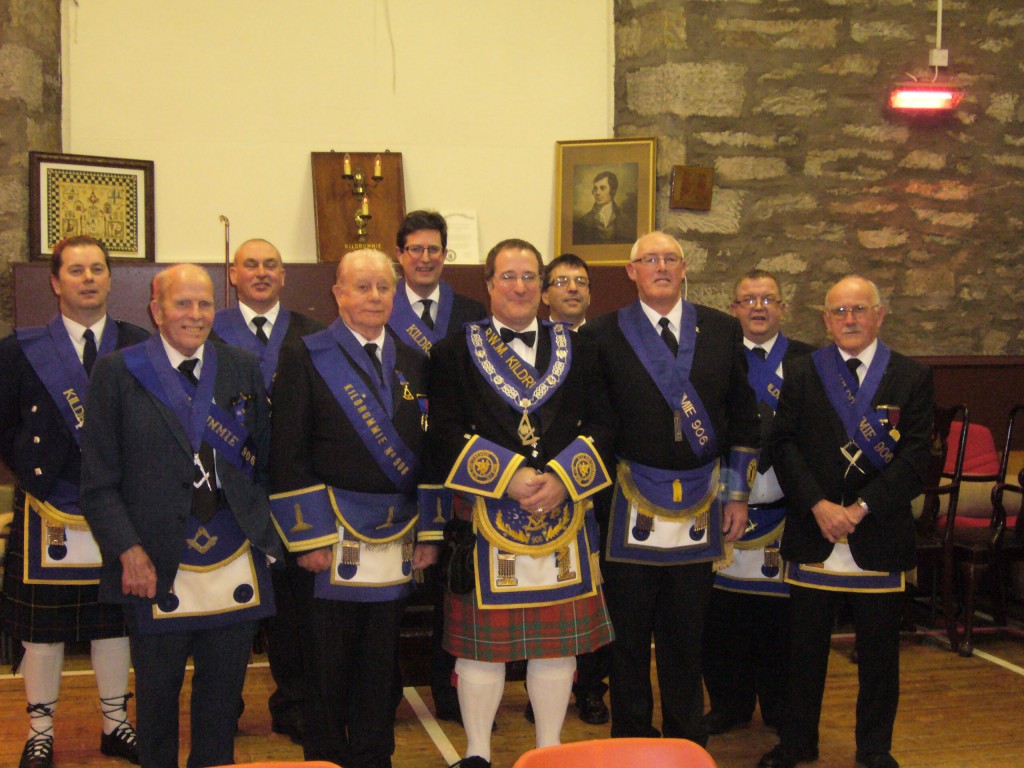 To the left is from a visit to St Andrew’s Lodge #70 in Perth City, Perthshire, where their RW Master is presenting me with a copy of their 250yr celebrations book of their founding in 1758. Visiting Masonic Lodges in the UK and Scotland in this instance gives one the deep appreciation of Freemasonry’s history and ancient beginnings even when we know that modern Freemasonry started in 1715 – 300yrs back in time.  It makes New Zealand a very young country.

I was hosted by RW Bro Hamish Young in Methven, Perthshire, seen on the right as a member of Lodge Kildrummie #906 at Methven 9kms west of the City of Perth on the road to Crieff.

Hamish is an ex Mayor (Provost) of Perth City and is seen above with the officers of Kildrummie Lodge #906, in Methven.  The degree the night I went to St Andrew’s Lodge in Perth was a 4th or Mark Master’s degree which they do in the “blue” Lodges in Scotland and we do in it in The Royal Arch Chapters here in NZ.