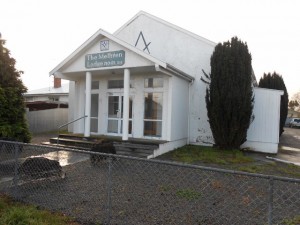 As viewed on the “HOME” page The Methven Lodge has had all occupations of the community as members and the membership peaked in the 1960s with just over 150 members.  This has seen a slow decline in numbers since largely due to the organisation not promoting or explaining its values.  Today Freemasonry is still alive and well in Methven, and active not only within the organisation, but in your community as well.  It’s value is as applicable today as it has been over the past 3 centuries.  A lot of it has been silent work and much of the community have little knowledge of it.  Many of today’s community have very strong links to Freemasonry with either fathers, grandfathers and beyond, relations or knows someone who  is or has been a member. 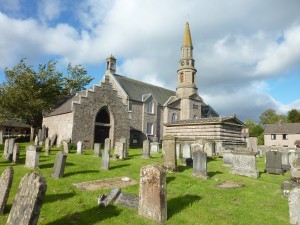 This website is designed to impart the great value Freemasonry has to the individual and the community at large, and to dispel many of the myths that the lack of information can bring about.

The Methven Lodge #51 has a close association with its namesake town of Methven in Perthshire in Scotland, with the Lodge Kildrummie #906 SC.  Correspondence and NZ members have visited the town and the Lodge if their meeting night coincides with travel 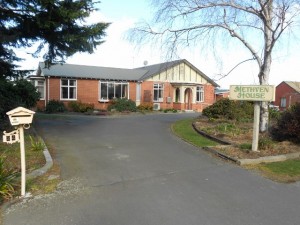 arrangements.  Visits and friendships have been molded with other Lodges throughout the Province of Canterbury and the Midland District #28 in particular, based from Timaru.  Official exchange visits are arranged expanding the friendships with the wider membership. 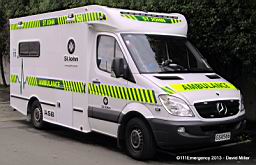 CHARITY and the FAMILY are the centre pieces of the Craft generally and considerable sums have been given to various organisations throughout NZ, generally involving health and human welfare generally, plus education.  Since 1978, over $4m to NZ Students, since 1988, over $1.5m to NZ Paediatrics and over $2.6m to NZ Gerontology nationally.

In Methven, recipients have been St Johns Ambulance, Search and Rescue, Methven House, 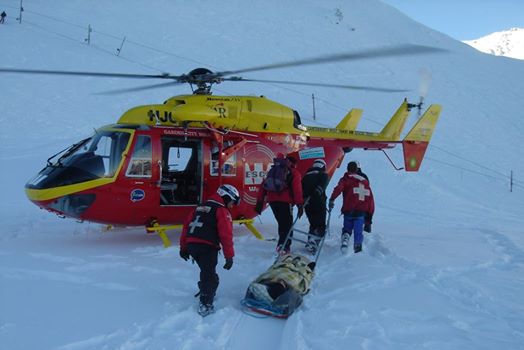 The College Good Citizenship awards to a senior boy and girl each year and Bursaries to selected students each year.  All these are considered worthy causes and recipients of funds, all originating from the individual members themselves. 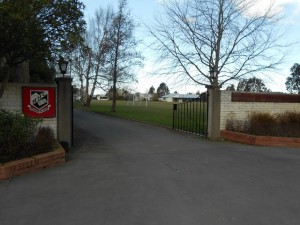 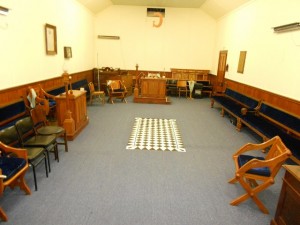 The Lodge rooms from the Master’s Chair looking towards the Senior Warden’s pedestal.

countries, Islamic Middle Eastern countries, African countries, Asian Buddhism countries, Russian Orthodox countries.  The one requirement in all is the belief of a Supreme Being whatever each might call him.  Visiting can be done internationally, and once received is a very rewarding experience. 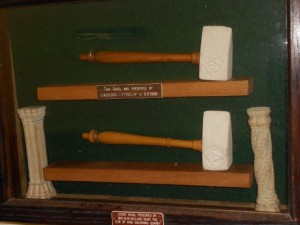 These GAVEL HEADS were mined from near to King Solomon’s Quarries from which his Temple was Built in Israel.  Also 2 Columns from the story of The Rosslyn Chapel, in Scotland, seen elsewhere on these pages. 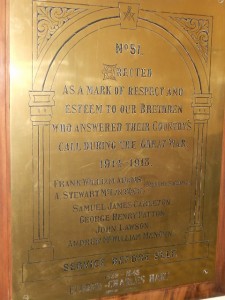 Our War Memorial Plaque to those Members who Served and those Sacrificed their Lives in 2 Great World Wars.

Within The Methven Lodge rooms there is history, and these photos show the Lodge rooms and the furniture.  The first is taken from the Master’s Chair looking down to the Senior Warden’s pedestal.  On the far left are two commemorative gavels in a small cabinet.  These gavel heads are granite mined from near to King Solomon’s Quarries from where his Temple in Jerusalem was built.  The second gavel was presented to the Lodge in Sept 1999 by VW Bro JV Findlay.  The first was presented to the Lodge in Nov 1941 by Bro W Monty Holland.  There are also two small columns which are replicas of two famous columns on each side of the altar of The Rosslyn Chapel, near Edinburgh, Scotland.  One of which is called The Apprentice Column and the other The Master Mason’s column.  The story of these can be found in a page dedicated to The Rosslyn Chapel under the tab “INTERNATIONAL VISITING“.

By the door in the far right is The Lodges war memorial plaque, showing the members who served in the two World Wars, two of which gave the Supreme Sacrifice.

With the second photo taken from the Senior Warden’s pedestal looking up to the Master’s Chair.  From this photo, on the far right hangs the Charter from the Grand Lodge of NZ by which we operate under.  Hanging on the wall to the left is the hand made centennial rug made by Bro Robert LW Lauchlan especially for this auspicious milestone celebrations. 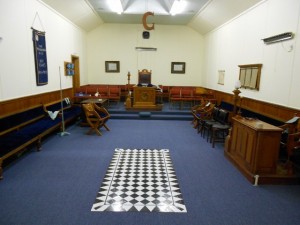 Inside the Lodge rooms from the Senior Warden’ Chair looking to the Master’s pedestal.

The names on the War Memorial Plaque are:  1914-1918 (Great War). Frank William Adams and A Stewart McClintock; who both faced the Supreme Sacrifice. 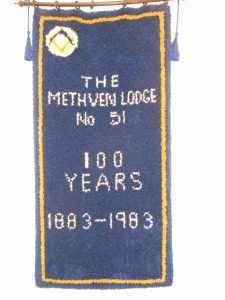 The Woollen Rug made by Bro. Robert LW Lauchlan and given to the Lodge for the Centennial celebrations in 1983. 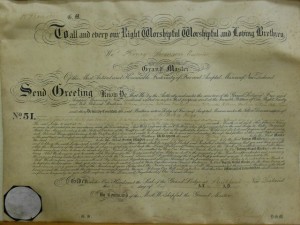 So it is seen that there is much built into The Methven Lodge #51 over the many years of operating.  The work within and for the community.  All this is achieved while the members enjoy the principles that this large and very unique International fraternity offers, plus enjoying the fellowship between members within the entire organisation.