Rebecca Graves receiving her $6000 Scholarship and Freemason’s Certificate from the New Zealand Grand Master, Mark Winger, in the New Zealand Legislative Chamber of Parliament Buildings, Wellington recently. Together with 32 other NZ University Students received a total of $220,000 from NZ Freemasons. This was the 40th year of these Scholarships totaling $5.2m up to this time to 1162 NZ University students. Charity is one of the cornerstones of Freemasonry. To be concerned for those in need is an essential quality of a Freemason’s way of life. One of the noted recipients of this same Scholarship in the near past has been our Prime Minister, Hon. Jacinda Adern.

Besides human health and welfare Freemasonry places much importance on assisting Education and the Arts, like Music.

Rebecca was born near Lincoln, but is engaged to a local Methven Dairy Farmer Vincent Koopmans.  Her supporting Curriculum Vitae or Resume for her Scholarship is summed up by a referee’s note: “Rebecca is a student of truly outstanding commitment and ability” and ending “with such capabilities, Rebecca is well on her way to becoming a very respected teacher”.  She is studying towards a Bachelor of Psychology.  She plans to complete a postgraduate diploma in primary education before becoming a teacher.  She has several community interests including doing team leader training as a lifeguard at the Selwyn Aquatic Centre.  Her current work with Horizons OSCAR involves interacting with school aged children taking part in after school holiday programmes, as well as with their families.  Horizons OSCAR based in Christchurch, operated under the Hornby Presbyterian Community Trust.

The Recipient of the Mt Hutt College Methven Freemason’s University Bursary was Aimee Elliott from Winchmore. Aimee will prove an excellent recipient of this bursary. She is studying at the Waikato University in Hamilton. Lodge Master Peter Rusbatch accompanied with George Currie made the presentation to Aimee. 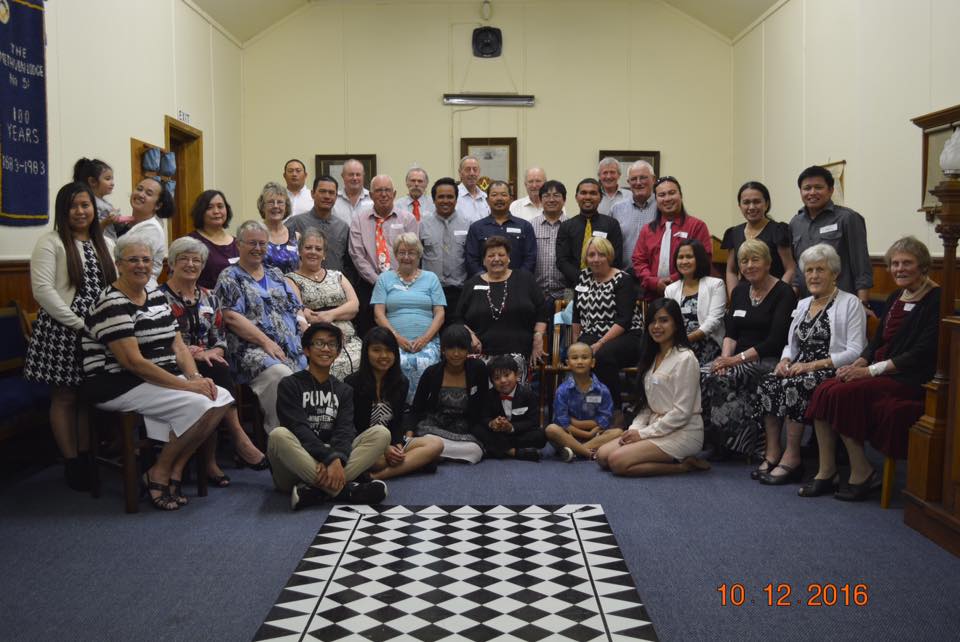 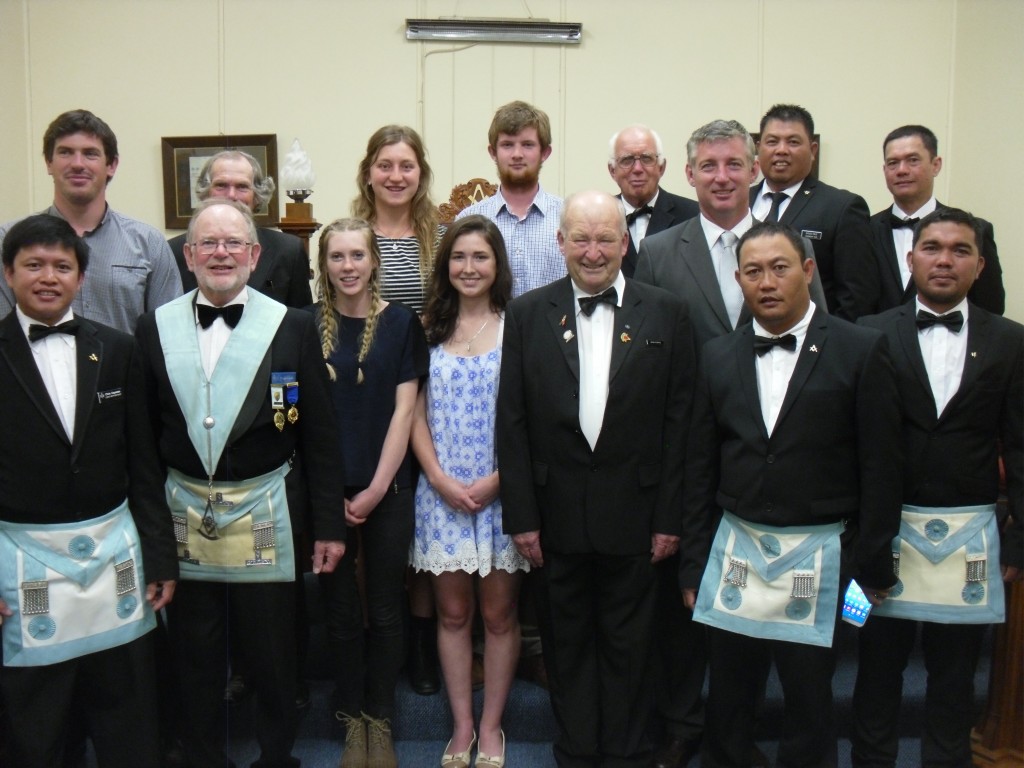 What a great turnout of Brethren last Wednesday evening for our special January meeting, jointly run with United Forces Lodge #245 in Chch and St Augustine #99 in Waimate. Here is NEARLY HALF of them – the Filipino half!!  65 Visiting brethren attended.  With the new Southern Divisional Grand Master RW Bro Rob Angelo from Chch and our very own Midland District #28 Grand Master VW Bro John Kinvig from Ashburton. They came from Amberley in the north to Waimate in the south. We were graced by the presence of PGM MW Bro Ray Duncan and there were many apologies. This is my personal thanks to all who took the effort to travel to Methven.  Bro Harold Ian McMichael had the 2nd degree conferred on him by courtesy of Arowhenua Lodge #473 by their Master WBro Robin Gourdie. 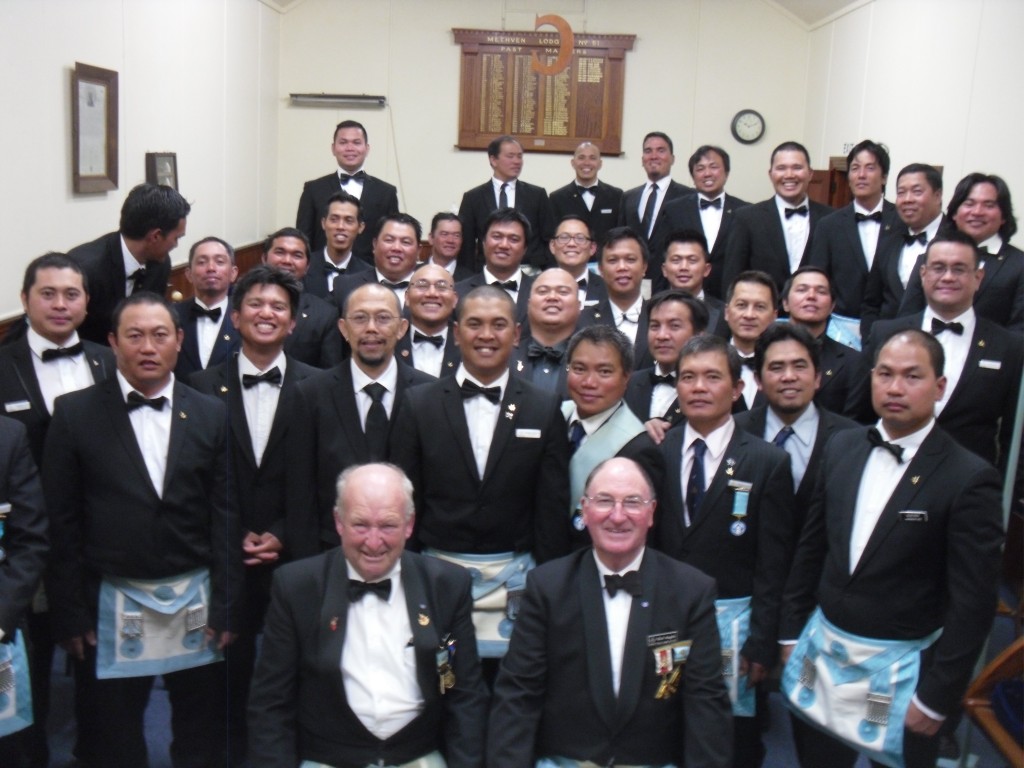 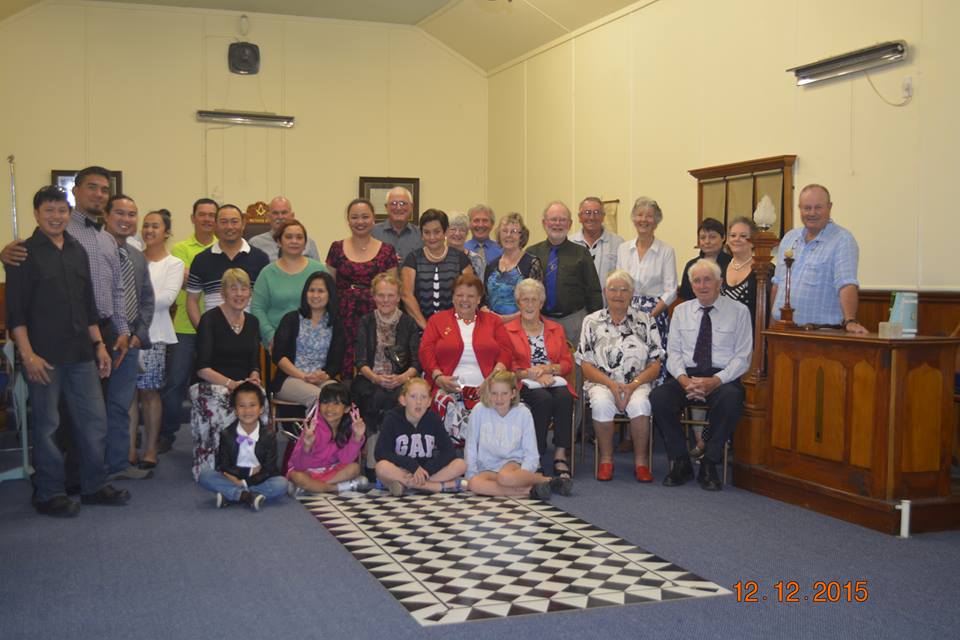 Those who gathered with the mostly widows sitting in the front chairs. A lovely meal in the refectory was had by all. Those seated on the chairs are Mrs Julie Goodwin, Mrs Cayanan (our SW’s wife), Mrs Joan MacKay, Mrs Dulcie Lyttle, Mrs Shirley Lock, Mrs Diana Dellow and our own Bro Jock McCrory

What a marvellous evening for our Christmas Dinner with our widows connecting us to the past and the youthful members giving the new foundation for a great new future. The atmosphere feels good to build on.  We had members who had not been for some time, children to keep us alive and our special evergreen widows to connect us to the past.  The future atmosphere feels good for the future of the Lodge by the enthusiasm of those who attended.

Our WM W Bro Christopher Cayanan was invited to present the prestigious “GOOD CITIZENSHIP“ award at the Mt Hutt College annual Prize Giving in Nov ’16, to a Senior Girl and a Senior Boy student, selected by the Principle  to the student who shows the attributes of Good Citizenship. 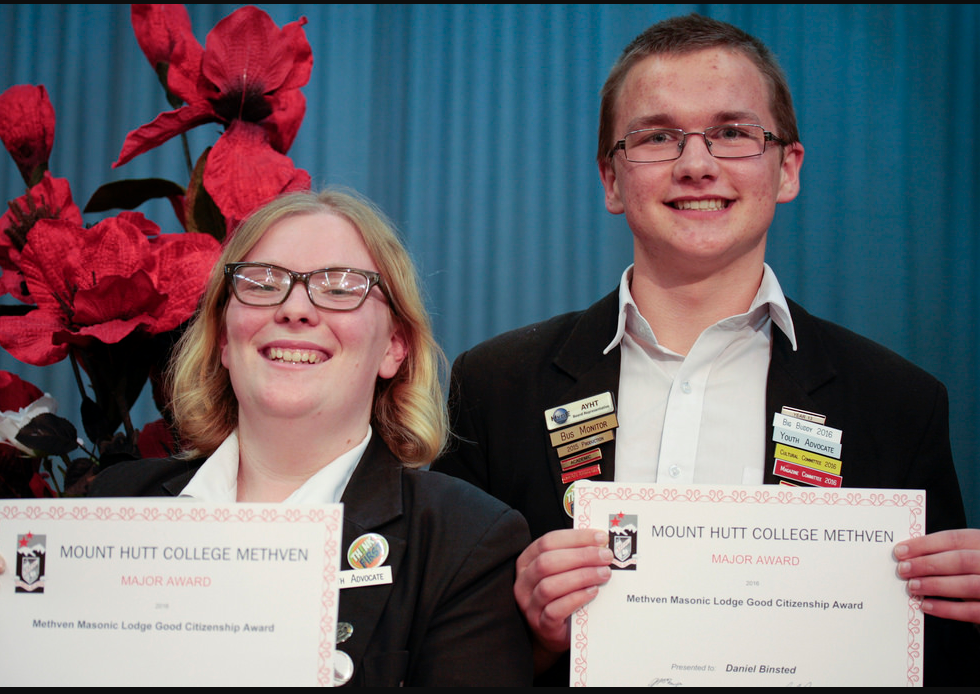 The two worthy recipients were Melanie Haworth and Daniel Binsted. 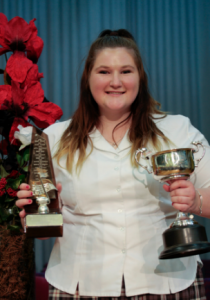 Also presented the same night by our W Master was the MIDLAND MASONIC District #28 Music award to a Mt Hutt College Student.

This years recipient was MATILDA SMITH

FREEMASON’S STAND at the CHCH A & P Assn Annual Show 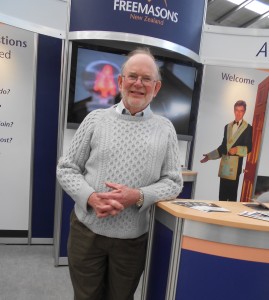 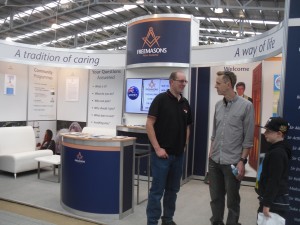 With Richard Webstor the Master of Progress #22 at Lincoln during a “light” moment of people walking past.

W Bro GW Currie spent two days manning the FREEMASONS promotional Stand at the annual Canterbury A & P Assn Show at the Agricultural Park in Chch 12 & 13 Nov.  The Show is a big one and great awareness was obtained by the Canterbury Lodges in having this stand there.

There were a number of Masonic inquiries from different sources. (None for Methven!)  A Woman saying to her husband he should be a member!  A Chch man said he has been thinking about joining for sometime.  Three male friends (30s) making a genuine inquiry.  A South African immigrant’s wife was encouraging her husband to get involved again.  A Freemason from Texas USA recently immigrated was seeking a Lodge to join.  Plus several others who willingly filled out wanting a followup call.  So the stand is a positive step into the public eye. 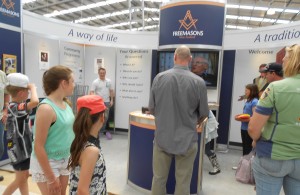 Many People Gathered Around the Freemason’s Stand at the Canterbury A & P Assn 2015 Annual Show. 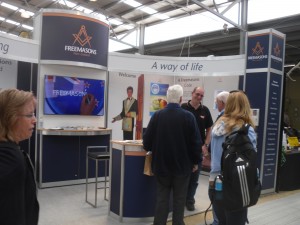 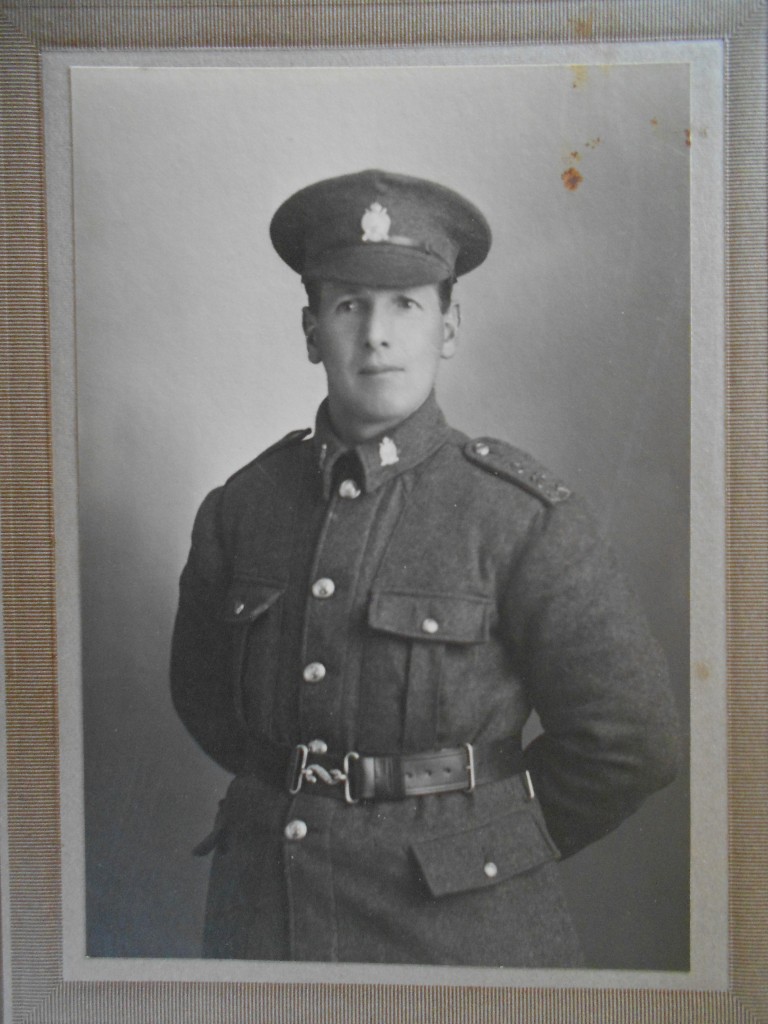 This photo was found in amongst the archives of the METHVEN MASONIC Lodge, with many other old photos.  Is there someone who sees this NZ Army Soldier/Officer, identify who it might be?  There is no name or any leads to identification at all, other than “To Mr Pawson, with regards, from you know”.  Faintly written on the reverse side.  Reply via “Contacts”.

He was a Lieutenant, as advised by the NZ Army Museum. Member of the 29th Re-reinforcement Regiment that left NZ in August 1917. According to the NZ Army Museum he could be either of: 55633 Smyth, John., 58551 Lawson, John, 37098 Powell, Edward Charles. These soldiers were the ones who left from Methven.  Can anyone help further and narrow the real name of who he is? 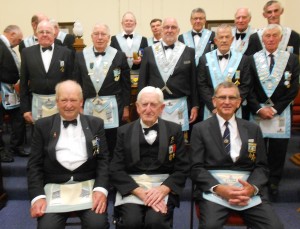 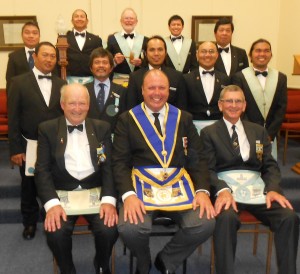 Masters in the above photo top left corner. The rest of above photo was the best taken except that corner!

With almost 60 Freemasons present of which 13 were Installed Masters from the Canterbury and Midland Districts,made the January meeting one of the best of recent times.  It was based on the second Wednesday meeting Lodges from these two Districts.

A second degree was conferred on our new member Edsel T Fernandez from Rakaia.  Great support was received from our Filipino brethren, of which some ably gave the charges to Bro Fernandez.  We had a visitor from Wanganui in the North Island, and a special guest from Sussex in the United Kingdom, W Bro Mark Adams, who arranged his NZ travel to be present with us this evening.  Our special and most senior and honorary member RW Bro Dr Roy T Wade PGW was also present.  Being a very long serving member of The Methven Lodge since 1951.  The charge of “The Seven Liberal Arts and Science” was also presented, which is applicable to this second or Fellowcraft degree. 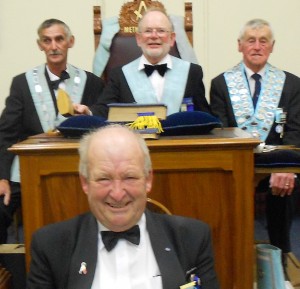 The Methven Lodge is a “GRANDMOTHER” Lodge!

FREEMASONRY has over 60 symbols most of which have explanations, so at our July meeting we had an evening of “Ancient and Alternative” charges.  We did some 29 over the three degrees which presented a most interesting evening.  Some of the titles were: The Seven Liberal Arts and Sciences, of Grammar, Rhetoric, Logic, Arithmetic, Geometry, Music and Astronomy. Scythe, All Seeing Eye, Hour Glass, Chalk Charcoal and Clay, 47th Problem of Euclid, The Plumb, The Level, Bee Hive, The Four Cardinal Virtues were some of them.  Good number of visitors came to Methven to see these presented.

After Lodge Installation May 2014 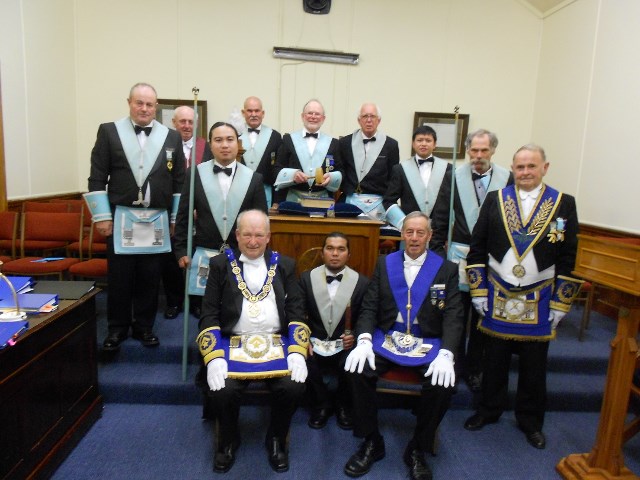