One of the most fascinating Chapels in the world with scores of intricately sculptured carvings, with intriguing associations to Freemasonry.  The Rosslyn Chapel is close to the village of Roslin in the Midlothian region of Scotland, just 7 to 8kms SSW of Edinburgh City.  It is aptly described as a “BOOK IN STONE”.

The unique ROSSLYN CHAPEL near the Village of Roslin 7 to 8 Kms SSW of the City of Edinburgh. 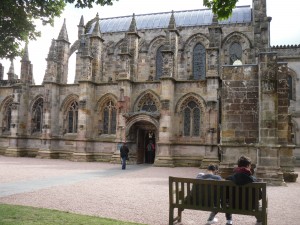 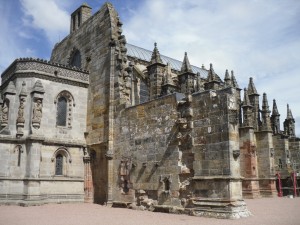 The ROSSLYN CHAPEL showing the “flat” end where the original plan of a cruciform Cathedral would have been constructed.

The layout of Rosslyn Chapel, the planning of which was started in 1440, is an exact replica of the ground plan of the Third Temple, built in Jerusalem by Herod.  Initially it was going to be built as a cruciform Catholic Cathedral but only the Choir portion was ever completed.  The Chapel was eventually founded in 1446 by Sir William St Clair, the third and last St Clair Prince of Orkney.  Though the Cathedral is incomplete it took 40yrs to complete the Quyre (Choir) part.  In 1587 around the time of the Reformation William Knox a brother of reformist John Knox was censured for “baptising the Laird of Rosling’s bairne” in the Rosslyn Chapel, which was described as a “house and monument of idolatrie, and not ane place appointit for teiching the word and ministratioun of ye sacramentis”.  The following year the St Clairs had not yet succumbed to the Reformation and remained Catholics.  In 1592 Oliver St Clair was summoned to appear before the General Assembly and threatened with excommunication if the altars remained standing after 17 August 1592.  So in August 1592 “the altars of Roslene were haille demolishit”.  From that date the Chapel ceased to be used as a house of prayer and soon fell into disrepair with it being used as horse stables. 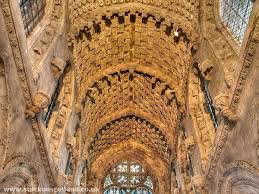 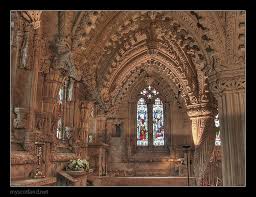 The Chapel remained abandoned until 1736, when General James St Clair commissioned repairs. and undertaken by Edinburgh stone mason John Baxter.  After he became the 3rd Earl of Rosslyn in 1837, James Alexander St Clair-Erskine undertook further repairs, overseen by architect William Burn.  In 1862 the Chapel was rededicated and the 3rd Earl declared that Sunday services could begin again.  Again in 1942 when WW2 and poor attendances the Chapel was threatened with closure for the second time.  However with the support of a Member of Parliament it remained open.

Since then the Chapel has received several restorations, with the last being completed in 2012 and a new Visitor centre built nearby.  The fascination of this Chapel brings many hundreds of visitors each year.  It is still under the ownership and control of the St Clair family and the present 7th Earl of Rosslyn.  The Chapel is no longer Catholic but under the Anglican Episcopalian Church of Scotland. 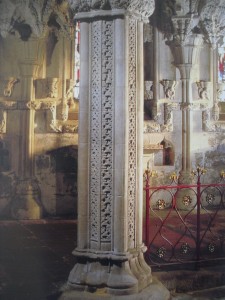 The enigma of the Rosslyn Chapel is perplexing and fascinating to say the least in relation to its Masonic connections.  The most obvious to view are the two big columns positioned on each side of the altar and going back to the founding days in 1446 and the guilds of the old operative Stone Masons.  Debate surrounded the form of sculpturing these columns would take.  It was decided that the Master Mason would be sent to Israel and the Middle East to discover ideas for sculpturing design.  This trip in those years would take several months and an apprentice on the site started the sculpturing of one column.  This was completed by the time the Master Mason returned from his trip of investigation to the Middle East. 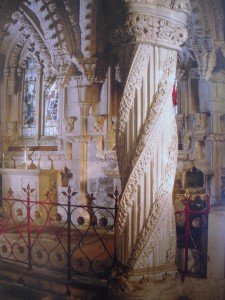 On discovering that the first column had been already completed The Master Mason was so incensed in anger that he murdered the apprentice and completed his own column.  Hence both of these columns are carved differently, with this first being called the “Apprentice” column and the other the “Master Mason’s” column.  A small sculpture of the murdered apprentice is placed among the rest.

There are scores of carvings and sculptures, most of the miniature size.  Many are of plants, flowers, the apostles and other religious symbols.  But being built by the ancient art of the old operative stone masons, Masonic symbols are included as well.  A carving of part of the Masonic first degree is shown.

But inside the chapel, beneath the carvings that blanket the walls and ceiling, is a spartan stone crypt that figures into one of history’s most famous mythologies.  According to legend, the treasure of the fabled Knights Templar is stowed in a still-deeper vault whose entrance is sealed off by a stone wall.  It was because Dan Brown who borrowed this legend for The Da Vinci Code.  In the book’s climactic scene, the heroes race from London to Roslin.  You only need to spend a few minutes in the church to understand how it led to Dan Brown’s flights of fancy.  The Rosslyn Chapel is a conspiracy theorist’s playroom, its interior a madhouse of mysterious stone carvings.  In the movie version of The Da Vinci Code, Tom Hanks’ professor of “symbology” stares reverently at the crowded walls. “Christian, Jewish, Egyptian, Masonic, Pagan,” he says, of the carvings.

The new Visitor Centre built nearby is full of souvenirs of the Chapel, Masonic square, compasses and emblems, replicas of those two columns, books of the Chapel’s history, and mystery puzzles.  Most of these can be purchased online through the Rosslyn Chapel website: www.rosslynchapel.com/

The Visitor Centre also has a nice Cafe. 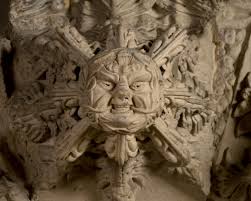 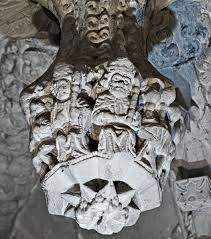 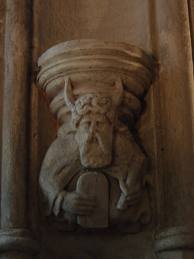 Moses, with “Horns”, holding the Tablet and Aaron’s Rod. 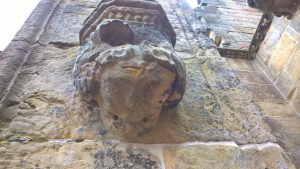 The brother who had received a severe blow to the forehead after his encounter with the 3 ruffian’s. 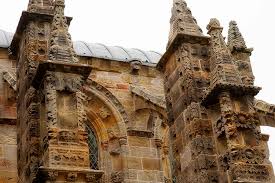 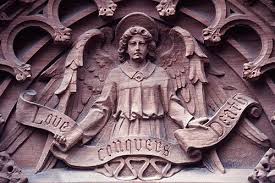 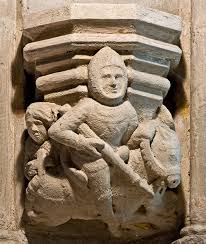 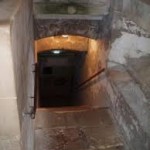 Steps Down to the Crypt and Room where the Sculpture Templates were Made, and where the treasure of the fabled Knights Templar is stowed.