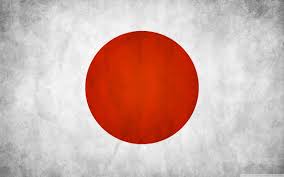 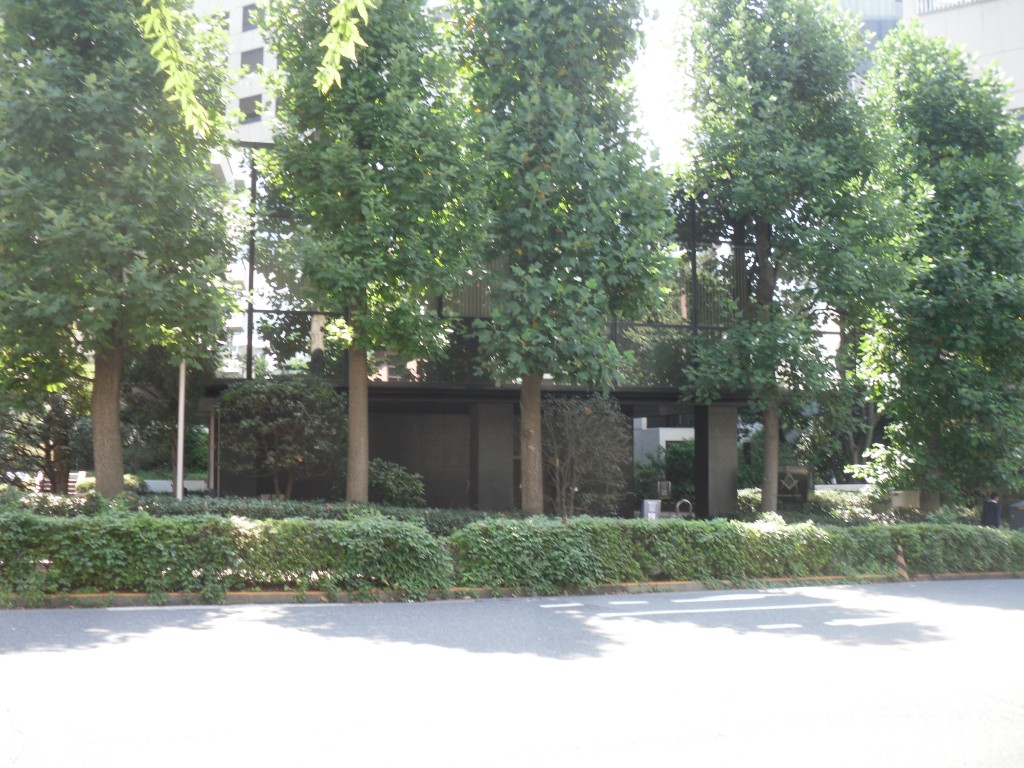 The Grand Lodge of Japan Building in Minato-Ku, Tokyo – right alongside the Tokyo Tower. It is a lovely 4 storied Building, with trees along the street frontage. The 1 metre cube is seen at the front. 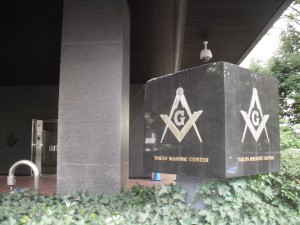 A one Meter Marble Cube is placed at the front of the Building with the Masonic insignia on it.

A visit to a Lodge under The Grand Lodge of Japan must be taken if the opportunity is offered.  Freemasonry in Japan has had many years of somewhat chequered operating due to the culture and frustrated by war.  The record goes back to 1864 and several Lodges operated right through to World War 2 when Freemasonry was largely abandoned.  After WW2 several Lodges were formed under charter to the Grand Lodge of  The Philippines, together with American allied forces, which still have influence today.  It was largely these Lodges that lead to the formation of The Grand Lodge of Japan.  Today there are still 2 Lodges operating under the Scottish constitution and one under the English, with 2 operating under the Grand Lodge of the Philippines. 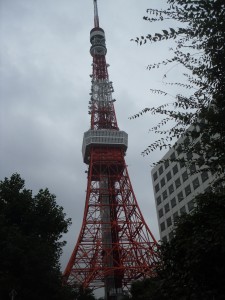 The Popular Tokyo Tower two Doors from the Grand Lodge of Japan’s Building in Minato-Ku, Tokyo.

The Grand Lodge of Japan has around 2100 members, with their Grand Lodge.offices and meeting rooms in a lovely modern 4 story building, with tress along the street frontage and a one metre marble cube with the Masonic insignia on it out at the front.  The building is in the suburb of Minato and second building from the well known Tokyo Tower. 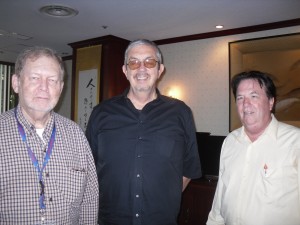 The writer here experienced time with 3 past Grand Masters and the Grand Secretary of the Grand Lodge of Japan in Sept 2015., followed by experiencing 2 meetings with the DeMolay-Land Lodge #22.  The first meeting was a full examination of three candidates where they had to recite the entire previous degree including the obligation before taking their next step.  This was done in each case with precision and dedication.  This meeting was followed by an initiation (first degree),  Most interesting as the Lodge Master does most of the degree work.  Even though both meetings were entirely in Japanese, I was impressed, as I could follow the proceedings relatively easily, and all floor work was done with military precision and neatness, as were the charges appeared to be, as they were all in Japanese.  No prompting was heard at all.

Each meeting was lead by two different Masters – probably due to the amount each had to do.  The interesting feature of these meetings was that the Masters wore hats!  The Master for the Examination wore a top hat, while the one who conducted the first degree wore a bowler hat.  Photos added here to show them. 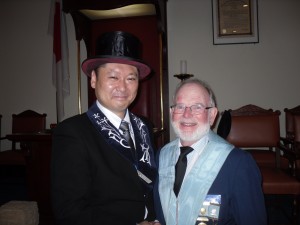 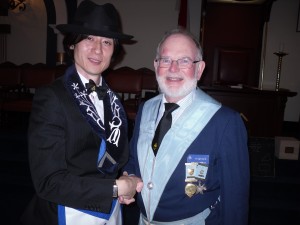 Acting Master Bro Masashi Nishikawa for the Initiation – First Degree. He did a remarkable job. 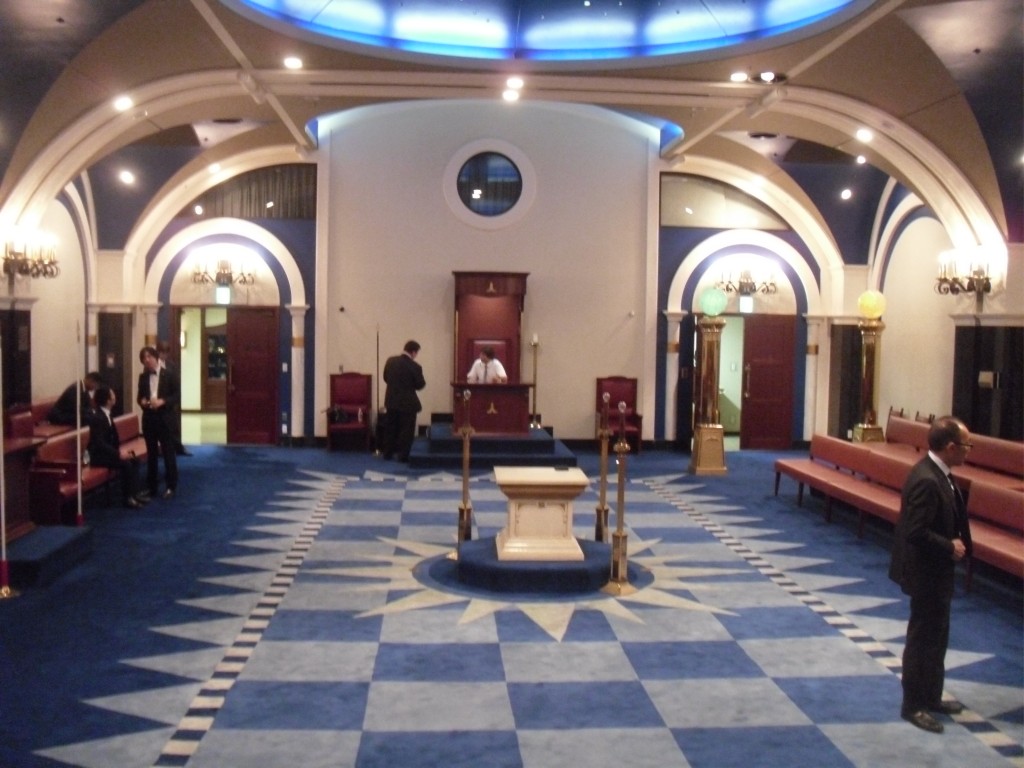 The Main Lodge Rooms as seen from the Master’s Chair of the Grand Lodge of Japan. Steward’s wand seen on the left. Lighting was brilliantly placed. 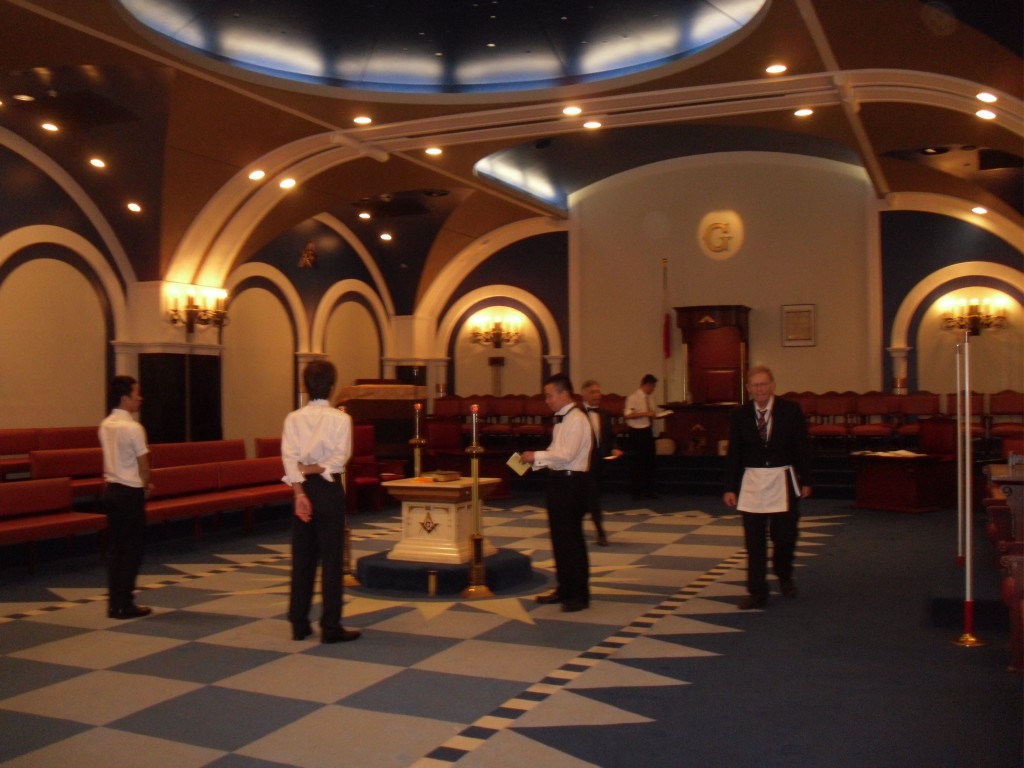 The Main Lodge Room as seen from the West – Candidates going through their final examination practice. Steward’s wand seen on the right.

The Grand Lodge of Japan’s 2 meeting rooms would have to be the finest and nicest Lodge meeting rooms I have been in.  A lovely feature of the proceedings was the secretary could control the Lodge rooms lighting to maintain emphasis on the part where the actual action was happening, by dimming various lights.  One room is for general meetings and the York rite meetings, while the other is for the “blue” lodge degrees.  The main difference being that the latter has a tessellated pavement (carpeted) and the former none.  All Lodge business is conducted in the third degree, then reduced for the lower degree work. 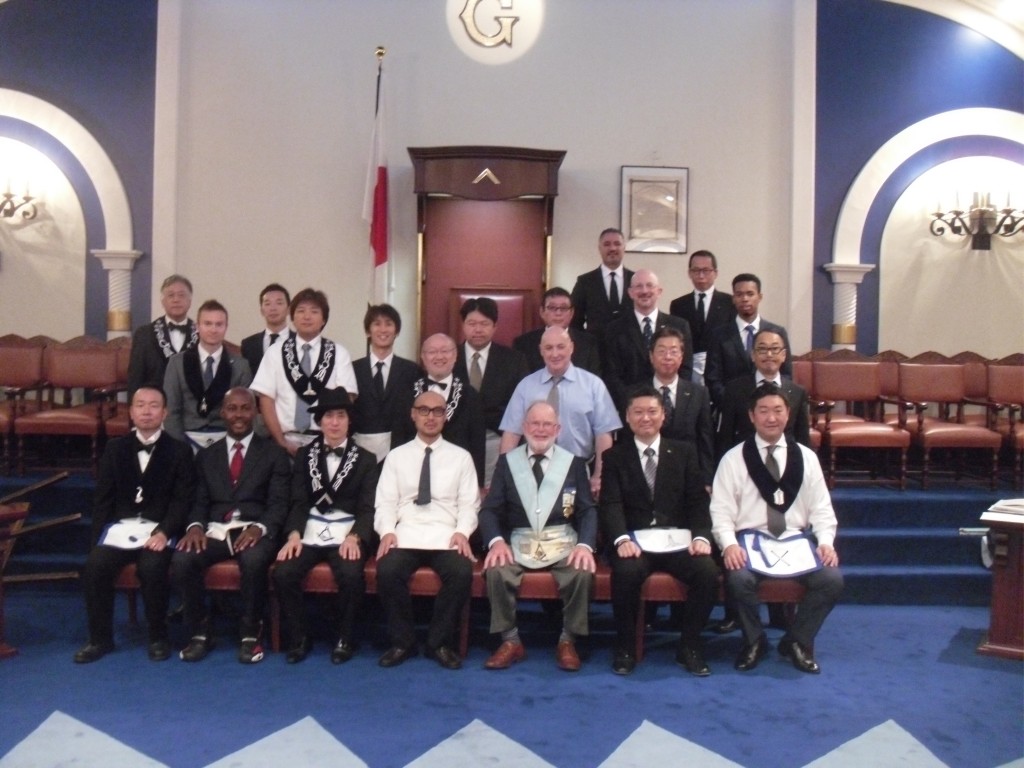 A Group of some, mostly officers present, at the conclusion. Both Masters seen 3rd and 6th in front row with the Candidate and the writer here. Secretary in back left.  The Methven Lodge NZL Master George Currie in front with the blue collar. 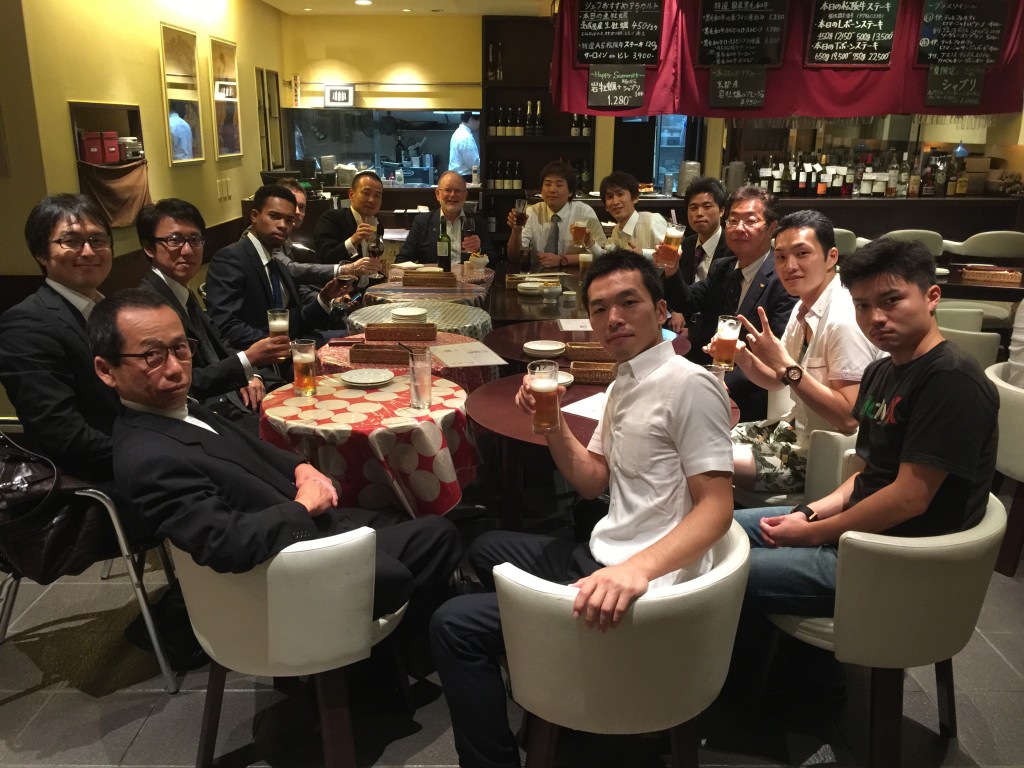 The Members of DeMolay Lodge-Land #22 retired to this Chinese Restaurant after their Lodge Meeting for a Social time together with some Prospective Members too.

The whole experience was moving and impressive.  My examination as a visitor was the most detailed I have met and included a brief obligation on the bible by 2 Past Masters, prior to the meeting.  A most interesting experience.  Those who remained retired to a nearby Chinese restaurant for a meal which included a few prospective candidates invited to be present as well.