Member of The Methven Lodge for:  44 years.

Brother Ian Herron is our member domiciled at Surrey, just south of Vanvouver, BC, Canada. 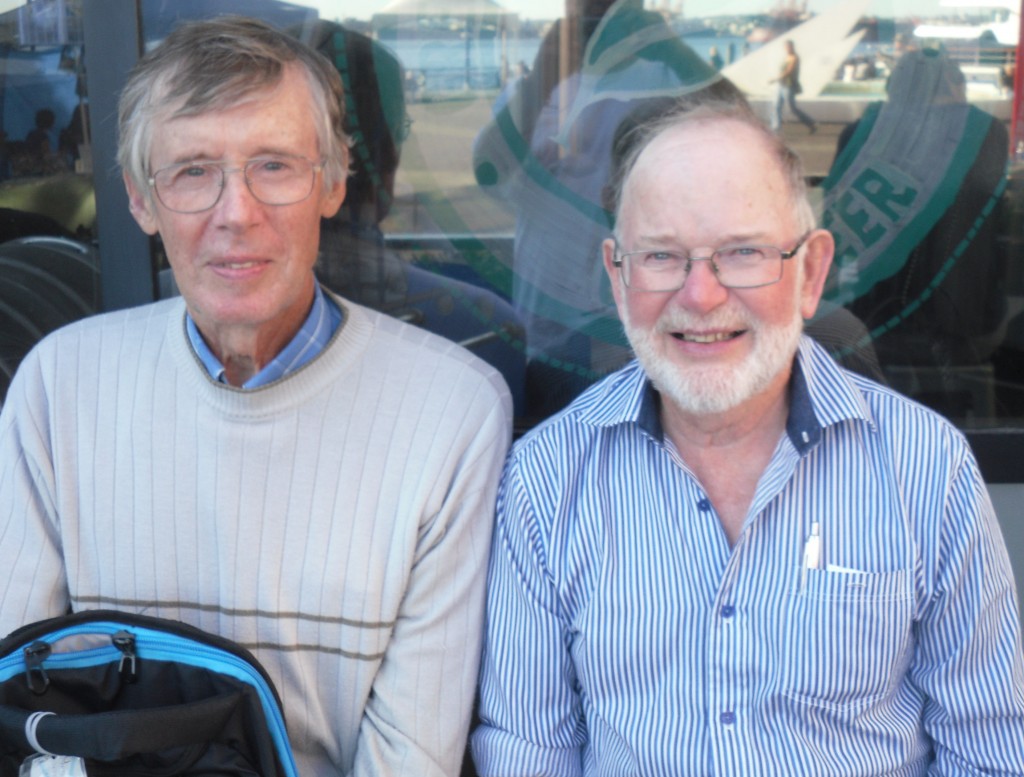 Bro Ian Herron with our W Master, while W Bro Currie was attending to his “Pastoral Care” when visiting Vancouver during Sept 2015.

W Bro Currie met up with Bro Herron on the Waterfront passenger terminal and after looking around this modern complex sailed across in the Sea Bus to Lonsdale wharf in North Vancouver.  A total of 4 hours were spent reminiscing and Bro Herron wanted to bring himself up to date with his Mother Lodge in Methven New Zealand.  He maintains a firm interest in our Lodge which is a remarkable show of loyalty.  He is in good control of senior health problems and has a keen interest in cycling and marathon running.  The Methven Lodge is fortunate in having a long serving member retaining his masonic interests from afar, since his initiation in Dec 1973.

Subject: The Peace Arch News – Interview re: The Ride to Conquer Cancer 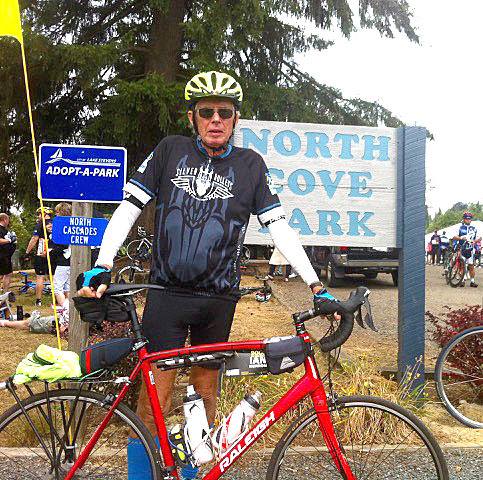 This is a very interesting article for folk to read knowing the challenges some go to. 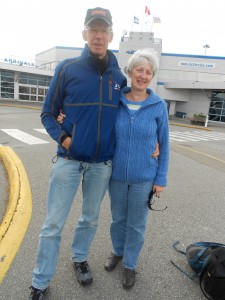 Bro Ian has had an interesting life – born in Balfour in Southland into an arable farming family, who’s father Cliff was an eminent Freemason in Southland, acquiring 32 degrees in the order.  The family sold from Balfour on the tragic death of Ian’s mother in a fire and they purchased Walter Peak Station opposite Queenstown across Lake Wakatipu.  It was from here that Ian’s association with Methven began.

Walter Peak was eventually sold later and Ian moved to Christchurch to commence a career in aviation at Wigram Air Force Base as an Air Frame Mechanic/Fitter.  A combine harvester which operated on Walter Peak was sent to Cromwell for storage.  This was eventually purchased by VW Bro Walter Currie of The Methven Lodge.  Ian Herron began his Methven association by regularly visiting the Currie farm and continued to operate his father’s Clayson M80 combine harvester here in Methven.  It was during this period of time he joined into The Methven Lodge on 12 Dec 1973. 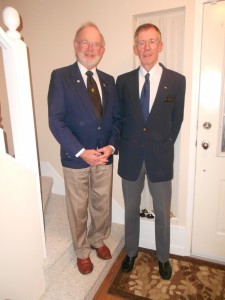 W Bro Currie and Bro Herron before leaving to attend a Masonic Lodge meeting in Surrey, BC at St James Lodge #80

He next was transferred to Woodburn Air Force Base near Blenheim, then to Napier with a private aircraft company.  From there he travelled to Canada and began working for Canada Air where he spent most of his working life, based largely at Calgary in Alberta, Canada.  Now retired and with failing eyesight he and his wife Jean live in Surrey just south of Vancouver City, BC, near the USA border.

Bro Ian’s hobbies have been based around aircraft and marathon running for many years.  He held a private pilot’s licence for many years both here in NZ and Canada, including twin engine aircraft, until his eyesight started to fail him in latter years.  He has competed in several prominent New York and Boston Marathons.  He was just a few hundred meters away from the bombs that went off near the end of the Boston race in 2013.  Cycling is another hobby he has.

The Herron’s have a “trailer” unit (caravan) which Jean now drives as Ian has lost his driver’s licence due to poor eye sight, and park up in Washington State of the US nearby and other parts of BC during their summer time.  It was while I (your WM) was with Ian & Jean in Nov 2011 that we attended St James Lodge #80 BC nearby and witnessed the “Vacant Chair Ceremony” and which Methven did first in April 2014 and explained elsewhere on this website.

It has been a great credit to Bro Herron that his Masonic interest has been maintained all these years, and that he has diligently kept his membership with The Methven Lodge #51 NZ since 1973.