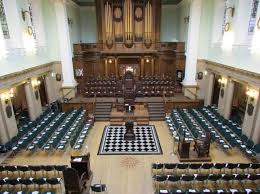 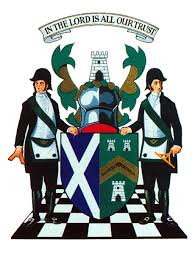 The Grand Lodge of Scotland is one of the three main constitutions that have helped spread Freemasonry around the world’s globe, from 1736.  The Methven Lodge #51 in New Zealand was once founded and consecrated on the Scottish constitution in Oct 1883, Lodge #694 – it joined the newly formed New Zealand Grand Lodge in 1890 but retained its Scottish heritage.  Since 1890 communication with Scotland was very spasmodic, but of more recent times communication and friendship has developed between Lodge Kildrummie #906, in Methven, Perthshire, Scotland. 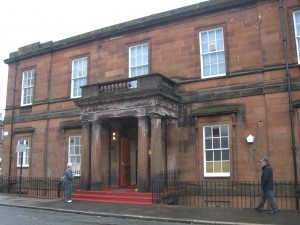 W Bro Ivan Ford after his year as Worshipful Master was the forth member of Methven, NZ to attend a meeting of Lodge Kildrummie #906 in 1995.  At that meeting he presented a Lodge gavel made by the late W Bro Alister Page from his mother Lodge in Methven NZ.  Prior to this W Bro Walter Goodwin did a visit in 1924, W Bro James Campbell in 1935 and presented to them a NZ gavel and received a chisel from Lodge Kildrummie to bring back to NZ, and Bro George McRobb in 1960 when returning to his homeland.

Then in 2015 W Bro George Currie was the first installed Master of The Methven Lodge in NZ to visit Lodge Kildrummie, Methven, in Perthshire.  On this occasion a special meeting was convened by dispensation as it was during their summer recess in Scotland.  This was especially arranged by dispensation to confer Honorary membership on W Bro Currie into Lodge Kildrummie #906, in Methven, Perthshire.  This was a very unique honour to bring back to The Methven Lodge #51 in New Zealand. 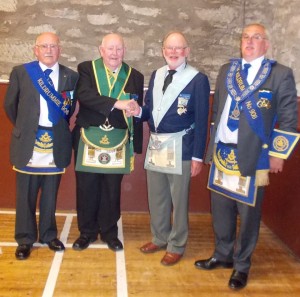 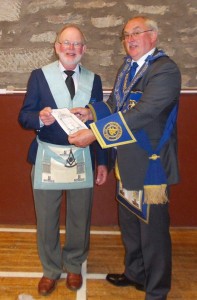 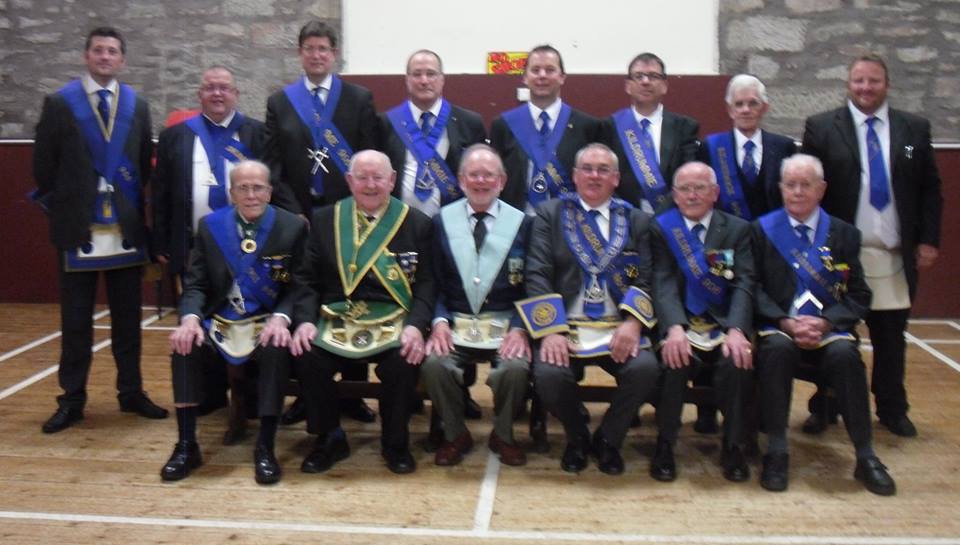 During 2011 W Bro Geo. Currie traveled through Scotland and attended 5 separate meetings.  Three were in the Province of Dumfriesshire where he was doing family research for a week.  Attending one initiation and 2 second degree meetings at Dumfries Kilwinning Lodge #53, St Michael’s Kilwinning Lodge #63 and Lochmaben to St Magalene’s Lodge #100.  Near Glasgow he attended an installation meeting at Wishaw, St Mary’s Coltness Lodge #31 where his Great Uncle John WT Currie was initiated.  Then finally to St Andrew’s Lodge #74 in Perth, Perthshire (near Methven village). 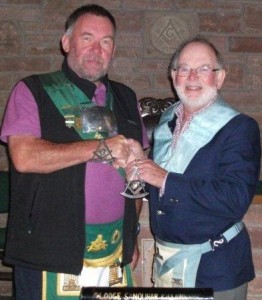 RW Bro Andy Brown, Master Lodge Sanquhar Kilwinning #194 wearing his Lodge Master’s Breast Plate and the two Master’s Jewels being Identical – to that of the MW GM of The Grand Lodge of Scotland. 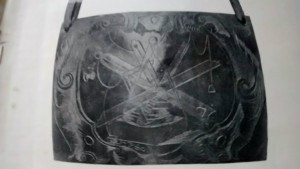 A daytime visit to Sanquhar Kilwinning Lodge #194 just north of Dumfries town I met up with their RW Master Andy Brown.  Their Lodge recorded history dates back to 1712.  He showed me around their Lodge in Sanquhar and of particular interest was the RW Master’s Breast Plate jewel above worn during Masonic meetings.  Made from hammered copper is 4 inches by 6 inches and convex in shape.  Believed to be the only one in Scotland and a photo of this Breast Plate is shown here, quite intricately engraved with the symbols of all the principal officers of the Lodge.  Presented to the Lodge on 13 January 1757.  The Lodge went into dormancy for 75 years between 1822 and 1897, but all records were preserved including the Breast Plate jewel which has been worn by the Master at every meeting since.  Of further interest was that both the Master’s jewels of Sanquhar Lodge #194 and the Methven Lodge #51 NZ, was that both Master’s jewels were identical in every respect to the marking.  These Master’s jewels are identical replicas of the Grand Master of Scotland’s jewel, excepting his is gold and these are silver. 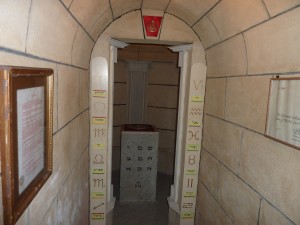 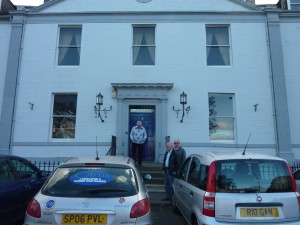