Hong Kong has an interesting Freemason’s structure in that they do not have their own Grand Lodge but there are 3 Districts that each work under the three main Grand Lodges of England, Scotland and Ireland as “The Districts of Hong Kong and the Far East”.  There are 32 Craft Lodges (plus side orders) who all meet in one of two Lodge rooms in Zetland Hall at 1 Kennedy Road, right alongside the historic “Peak Tramway” that has taken visitors to the top of Mt Victoria since May 1888 to view over Kowloon, of Hong Kong City.

Hong Kong an ex British Colony and since 1997 is a pure autonomous region of mainland China with its own government, driving on left side of the road as the British did. 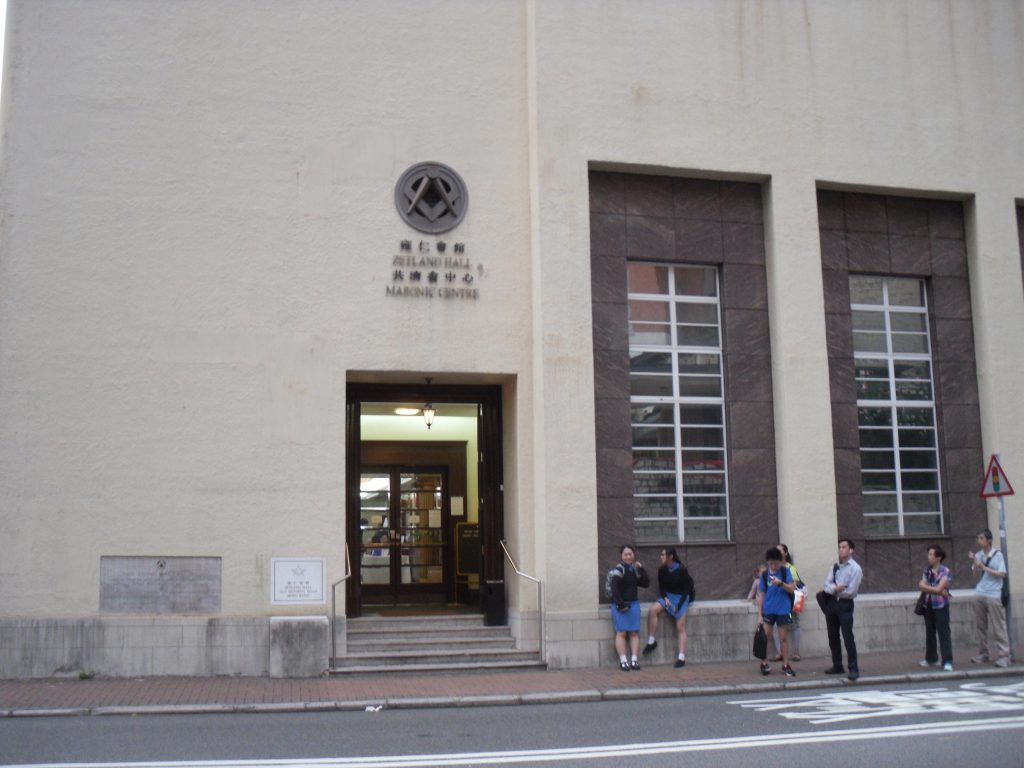 ZETLAND HALL, 1 Kennedy St, HONG KONG – Right alongside the “Peak Cable Car” to Mt Victoria. The home of 32 Masonic Lodges (plus side orders) of the Districts of Hong Kong and the Far East.

The Freemasons building took its name from Zetland Lodge No. 525EC, the Masonic Lodge that built the original one, and that was itself named for Thomas Dundas, 2nd Earl of Zetland, Grand Master of the United Grand Lodge of England from 1844 to 1870.

Hong Kong is much larger than it appears on a map, 2750 sq Kms of mountainous country and islands, with a lot of motorways and big new bridges out to the islands, modern very large airport and to Macau, but densely populated in the City and urban regions with the 7m people housed in many high rise buildings.  The population density is 6700 per sq Km over the land area, but 57250 people per sq Km in the City and urban regions.  At 29deg north it is very warm and was into the 30sC for the 3 days writer was there.  So with 32 Lodges there, it is well serviced by Freemasonry. 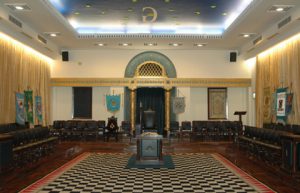 The writer had the privilege of attending Lu Pan Lodge #9837EC meeting in Zetland Hall, where they worked a double 3rd degree on two new candidates, in the “Blue Room” in the photo.  90% of those in attendance were Chinese, and it was a warm feeling meeting many of those present, including the Master W Bro Hans Wing Yu Yeung.  The meeting was followed by a sumptuous meal afterwards.  W Bro Henry Chong PGSGD Dist G Tyler advised he was coming to Rotorua, NZL in 2018. 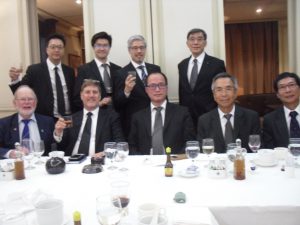 Some of the Lu Pan Lodge officers after the sumptuous meal after the meeting. 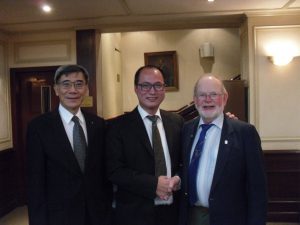