CANADIAN Freemasonry, like Australian Freemasonry, where each Province has its own Grand Lodge and self jurisdiction.  The writer attended a meeting in Surrey, BC where he found The Ceremony of “The Vacant Chair” was done by The St James Lodge #80 (operating under the Grand Lodge of BC & Yukon) in remembrance of those fallen during past wars.  This was done during their month of November which is the North American month of remembrance being the month of the final declaration of WW1 ending on the 11th hour of the 11th day of the 11th month, 1918. 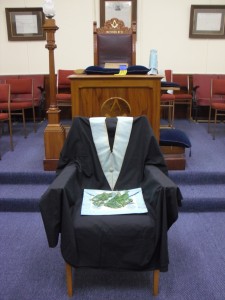 This ceremony was brought back to New Zealand and the Methven Lodge #51 doing this at their April meeting, the month of NZ’s ANZAC commemorations. 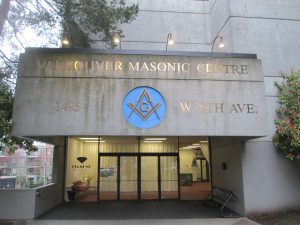 The writer went over to to Sunshine Coast across from Howe Sound by BC Ferries where there are many holiday homes along a narrow stretch of coastline and passed a large wooden building that was once a Cattle Barn at Roberts Creek which had the Masonic Square and Compasses on it.  So stopped to take a photo and found an open door where a “Masonic” locksmith was replacing the door lock!  Spent an interesting half hour talking to the JD of Mount Elphinstone Lodge #130 at Roberts Creek and looked through the building.  The conversion from a Cattle Barn was well done with nice Lodge Rooms and a big refectory that is used as a community hall with catering facilities.  Amazing what can be found in a relatively isolated part of BC. 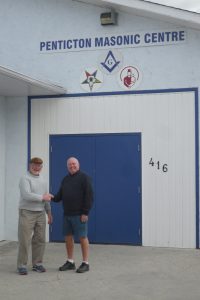 Penticton Masonic Centre, in the Okanagan region of BC. With Bro Alistair Duff. 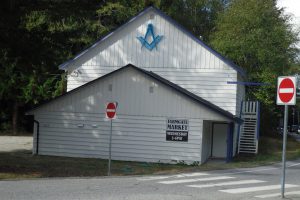 Mt Elphinstone Lodge #130 at Roberts Creek, on Sunshine Coast, BC.